Chewang Norphel is responsible for making 15 Artificial Glaciers earning him the title, ‘Iceman of India’.

Ladakh,a cold mountain desert, sees a low average rainfall of 50 mm annually making people dependent upon glaciers as their primary water source. Majority of the population depends on agriculture, and their main source of irrigation water is the water that comes from the melting of snow and glaciers. The way it works is that, the requirement of water during the summer (when it is maximum) is met by the running water resulting from the melting of the natural glaciers. 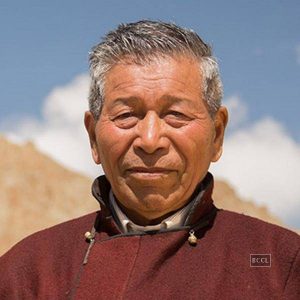 With rising global warming, the glaciers in Ladakh have been receding quickly. A lot of water is getting wasted during the winter and due to the severe cold climate, farming in the winter is not an option.

Chewang Norphel from Ladakh is one the few people who could sense these effects of global warming way back in 1966. He would see the problems faced by the villagers due to the scarcity of water where he grew up and in the neighboring areas. Not only has Chewang been a solution provider, almost all the villages in Ladakh have roads, culverts, bridges, buildings or irrigation systems made by him. Today, he is called the “Iceman of India” and has created 10 artificial glaciers in Ladakh to help people deal with water scarcity in this cold, mountainous region.

He first got the idea when he saw water dripping from a tap which was kept open so as to avoid the water from freezing in winter and bursting the tap. This water froze gradually in to an ice sheet as it came in touch with the ground.

He figured that the water that melts from natural glaciers as a result of high temperatures in summer goes to waste as it flows into the river. As simple as it may sound, his idea was to store the melting water from the glaciers in summer and autumn by freezing it into an artificial glacier rather than let it run in to the river which would have dried out later. Then this artificial glacier would melt during spring period providing water to the villagers at the right time. After putting all his engineering knowledge, field experience and passion to work, he started his first experiment in Phutse Village. He fashioned canals from the main stream to divert the water to small catchment areas located 4 kms away from the village. He also created a shaded area to keep the water frozen in winters.

Today, 15 glaciers have been built to meet the requirements of water. The smallest one is 500 ft. long and the largest one is 2 km long.